Russ teddy bears, you simply couldn't have a teddy bear website without mentioning this modern day goliath in of the teddy bear world. 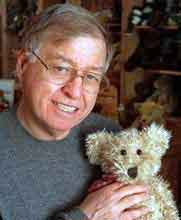 Sadly after more than 40 years of making plush toy bears and gifts, the company ceased trading and some of the designs were sold to another company. But many of their bears and soft toy animals can still currently be bought, although the range is much reduced as stocks run out. Possibly making older Russ Berrie bears rather collectible and sought after.

I currently have a Russ bear sitting on my desk called Tennyson; he is one of my favourites. He will keep me company as I write about Russ Berrie Ltd.

Although Russ teddy bears are mass produced they have always been made to the highest standard with strict quality control. No animal fur has ever been used to produce their plush toys and all materials are non-allergenic and surface washable for hygiene.

There have been many different items produced by this company over the years but there are some brands which stand out. They are traditional teddy bear range, the Luv Pets, Caress and Yomiko brands.

Traditional Teddy Bears - These bears look more like the toy bears you would have been given as a child and take their design from much older toy bears.

Russ teddy bears are a personal favorite of mine, especially within recent years. Most of these bears have a long curly plush and elongated feet and arms. Packed full of character and certainly a collector's item now that the company is no longer producing bears. 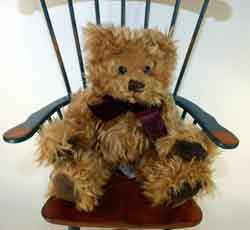 Russell Berrie came from common beginnings, living in the Bronx In New York with his family who owned a small jewellery shop.

Even from an early age Russell remembers hearing his father talking about his shop and the day to day running of the business and feeling that he wanted to be part of this business world too. This desire to be a business man led him to become a salesman for a toy company and after seven years of selling someone else's product, decided to set up his own toy and giftware business with just $500.

From the beginning Russ products were manufactured in China, to keep costs down, with the head quarters in Oakland, New Jersey, USA. The decision not to manufacture their products themselves was due to the fact that Russell always believed that you should always play to your strengths and as he always said, he was a salesmen and not a manufacturer.

One of the first creations of the new company was a character called a Fuzzy Wuzzy, soon followed by figurines called Bupkis and Sillisculpts. All of which proved to be very successful and soon began to propel the company into large turnovers.

Over the years the company has been recognised as one of the fastest growing privately owned companies in the US and in 1999 turned over three hundred million dollars.

In 2011 the company ceased trading due to the world economic downturn.

Back to top of this Russ Teddy Bears Page