Care bears have been with us since the early 1980's and were originally created by a greetings card company in America to adorn a range of cards. 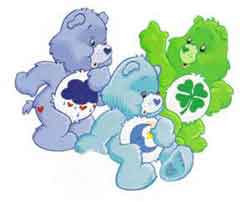 They are aimed at babies and very young children and are designed to teach children about good and evil, kindness and caring and other early life lessons.

There appearance is much stylised and not at all based on the traditional teddy bear look. They are brightly coloured and have different symbols on their tummies to signify their name and special power.

Over the years the care bears have been extremely popular and have sold millions of dollars worth of goods ranging from soft toys to books and DVDs. They have also appeared on their own television shows and several big screen movies all of which has propelled the bears to celebrity status amongst the very young amongst them.

These happy characters have been with us for over thirty years and during that time not only have new bear characters been added, their design has changed and the range of products have grown.

The bears have gone through several re-launches and so as a collector there are many areas to choose from for your collection.

Many of the bears can be found on Ebay for sale. Simply click on the name of the bear you are interested below to find them for sale.

The original ten care bears to launch in 1982 were:

Since then another twenty five care bears have appeared, although some only briefly within films and on TV.

During this early period the bears proved to be very popular with over 40 million soft toy Bears sold.

1991 the bears were re-launched for the first time

2003 another re-launch to celebrate their 20th anniversary year. The design of the bears were changed slightly at this time

2007 another re-launch with the movie "Oopsy Does It" and a new Tv series. also another bear redesign.

2009 saw the bears take on a new direct and new powers with redesigned belly badges.

The bears continue to be popular and new products are continually being produced.

Back to the top of this care bears page

Back to teddy bears home page