Teddy bear stories have been popular since the early teddy bear craze at the beginning of the twentieth century.

Everyone must remember being told a teddy bear story when they were young and loving the cosy and safe feelings that surrounded them. There simply something about a bear that is both charming, sometimes a little frightening but always comforting that makes bear stories still poplar today.

There are still many new children's stories and books being produced to this day which feature our cuddly furry friend, some designed to teach lessons and some simply for fun.

I know that many of you are budding writers and would like to share your stories with other bear fans. So I have made it easy for you to create your own page and submit your own story. Simply use the form below.

Click below to see contributions from other visitors to this page...

A Pair of Bears

After my husband was lost overnight in the woods many years ago, I gave him a greeting card featuring the famous classic teddy bears named Clarence and …

Barney Bear was nervous. He would have liked to have seen where he was going but because he was only an average sized bear he couldn’t see out of the …

Traveling Teddy Bear  Not rated yet
Hello there, my name is Adrian Ludwig Gardner and I was rescued off ebay some years back by Jess, my owner.Since I've been living with Jess,I've developed … 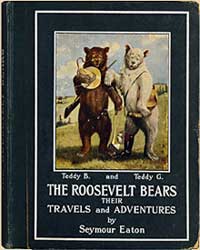 Perhaps to earliest bears to become well known in Literature are the Roosevelt Bears. They first appeared around 1905 in American newspapers and were the tales and verse of two bears, Teddy-G and Teddy-B.

The stories were written by a Seymour Eaton and they soon became a firm favourite amongst old and new alike.

Four books were published which contained the exploits of the two bears. These were:

Smaller books were also published but these were taken from the original books. Copies of any of these books are extremely rare and sought after collector's items. 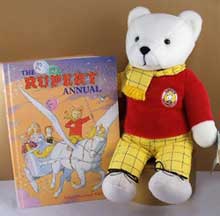 Rupert was born in 1920 and began life appearing as short stories in the Daily Express newspaper in the UK. He was created by an Illustrator, Mary Tourtel and remains one of the world's most popular bears, even though he is now well over 90 years old.

Find out more about Rupert the bear here. 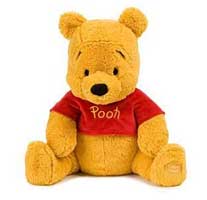 The bear with perhaps the silliest name for a bear is perhaps the world's most famous teddy bear ever. The first book, "Winnie the Pooh", was first published in 1926 and sales of this book and other merchandise still generate millions of pounds every year worldwide. 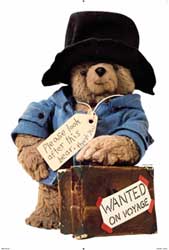 The bear named after a London train station first appeared in 1958 and is the story of a Peruvian bear coming to live in London and getting into all sorts of trouble along the way.

With his bright blue duffle coat and red wellington boots, he is still one of the most recognisable teddy bears around.

More about the Paddington Bear story.

Back to the top of this Teddy Bear Stories Page