The Rupert the Bear Story

Who is Rupert the bear, that as the song goes "everyone knows his Name". Well he began life in 1920 in the UK as a comic strip in the Daily Express newspaper. 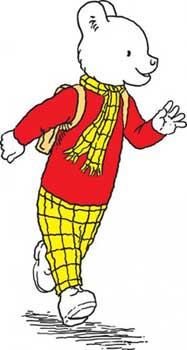 He was commissioned to help boost the readership of the paper and to compete against another newspapers comic strip called teddy Tail.

Rupert bear was originally devised and drawn by a Mary Tourtel who was illustrator and coincidentally married to the sub-editor of the Daily express.

Her first story was called "Little Lost Bear" and even from this very first story Rupert was instantly recognisable as the bear he is today. Wearing chequered trousers and scarf, however he his clothes were predominantly pale blue in colour, whereas we know him now as dressed in a red jumper with yellow and black chequered trousers.

Rupert bear lives in a place called Nutwood with many friends. The original Mary Tourtel characters were called:

Later when the story and drawing was taken over in 1935 by Alfred Bastall, new characters were added such as:

These characters remain at the heart of the stories and are in their own right loved alongside the little boy bear Rupert.

The Rupert the Bear Teddy

Originally Rupert bear was found in newspapers as a comic strip and then in annuals. It wasn't until the 1960's when the first soft toy Rupert bears could be bought.

I remember my sister having her own Rupert during the seventies; he was her favourite toy and became rather grubby over the years from being carried everywhere.

Styles of soft toys have changed over the years and this can be seen in the many different styles Rupert has appeared in over the years. Here are just a few of them.

The Followers of Rupert the Bear

Even today over 90 years since his first appearance, Rupert the bear remains extremely popular amongst children and adults alike.

There are collectors of Rupert memorabilia all over the world, with some collections running into thousands of pounds. His endurance in today's fast moving digital world seems to be down to his pure innocence as a little boy playing with his friends in a quiet little English village. Something which seems to have been lost these days.

Rupert has his own fan club online called "The Followers of Rupert Bear", where fans of the little bear can share their love and memories and enjoy the company of likeminded people, young and old. www.rupertbear.co.uk

Rupert first appeared on British televisions in 1971 in a children's series which rand for four years and over a hundred episodes. This series was made with puppets and had its own catching song which hit number 14 in the hit parade and was sung by Jackie Lee. You can see and hear the song below.

Rupert reappeared on TV in 1985 in 35 short narrated stories with still pictures. This ran for three years. 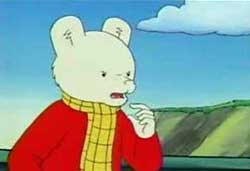 It wasn't until 1991 that Rupert bear returned to our screens this time n carton form. This series was first shown in Canada, followed by America and then the UK. It has now been shown in many other countries around the world and would explain why Rupert is still so popular around the world.

As with everything these days, the latest TV series has been made using CGI and Rupert and his friends have been brought up to date to suit modern children. Such changes include Rupert wearing trainers and some of his friends appearances have been changed, such as Edward the elephant who now no longer sports tusks. 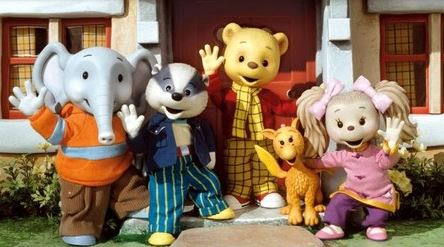 Since the very early days of Rupert's fame items have been made to entice fans to buy related items showing the little bear and his friends. Early items include mugs and or course annuals and books, with items such as duvet covers and even curtains becoming available.

For fans of Rupert the bear there are many second hand collectibles available which are not that expensive. Here are just a few of the latest collectible items available.

Back to top of this Rupert the Bear page

Back to Teddy Bear Stories page