The American Teddy Bear has been with us since around 1902 in various forms. However the name Teddy Bear didn't really take off until the re-election campaign for the American presidency of Theodore Roosevelt in around 1905. Theodore (Teddy) used the story of his compassion towards a wild bear on a shooting trip to his full advantage.

Mr Roosevelt adopted the soft toy bear which had sprung up since his legendary shooting trip as his mascot during his campaign. It soon became known as teddy's bear with the s being dropped soon after. This name for soft toy bears has stuck ever since and the world over we know them as teddy Bears.

Of course toy companies in the US have been around for much longer than the Teddy but the popularity of the soft toy bear helped to both promote existing companies and create many more. Some which even still exist to this day.

The following American teddy Bear Companies are just a small selection of some of the earliest and most well known for their bears. It will give you a flavour for what the American bear looks like and the characteristics which can be used to identify them from other countries teddy's.

Trademarks - The company did not have any trademarks in the early days. A loose label in the shape of a circus wagon came later, followed by some less ornate labels with just the word Ideal on it. 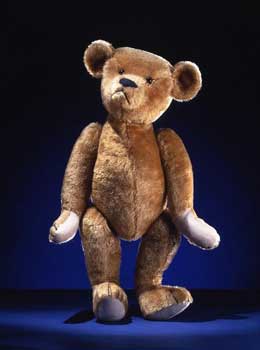 The bears made by this company were often identified by their very round ears which is shown in this picture of the bear presented to the Smithsonian in 1964 which is said to be the first bear inspired by Theodore Roosevelt.

1904 Mrs Robinson bear, which had less protruding round ears and had a rather protruding and pointed hump on her back. Other Characteristics are:

This early American teddy bear company had a short manufacturing life but during this time they made quality toy bears. 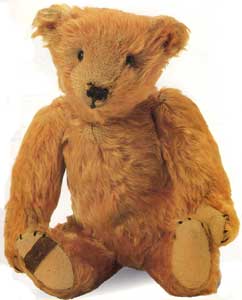 A rare example of one of their bears is the 1907 "Blissful" bear which carries the companies label stitched to the bottom of the foot.

This bear has many of the traditional characteristics of the American teddy bears of the time such as:

This company started its life making various toy animals and necklaces. However once the craze for bears began it started in 1906 to make their own version of the teddy bear. 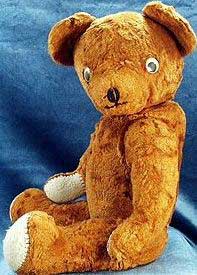 The company was started by a German emigrant to America, Adolph Gund in Connecticut but moved to New York shortly after.

Early bears made by this company have never been identified, so it is impossible to say what they looked like.

During their career the company produced soft toy characters from Walt Disney films and in 1978 moved into producing collectors bears. The company still exists today, however their bears are no longer made in the US.

Bears from this company are very rare and are rarely found outside of the USA. This is because the company only made bears for a short time and had only one distributor. 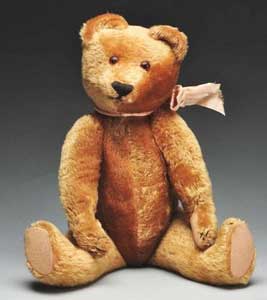 This example of an Aetna Bear is called "Still Hope" was produced in 1907. His name comes from an ancestor of the owners who was scalped by Indians and who was left for dead but who recovered and lived to a ripe old age.

The trade mark of the company is a oval stamp on the left foot , marked Aetna.

A distinguishing feature of this bear is his eyes are made from brown and black glass eyes which was unusual at the time.

Originally started as a company who made educational toys the Knickerbocker Toy company moved into making toy bears from around the 1920's. 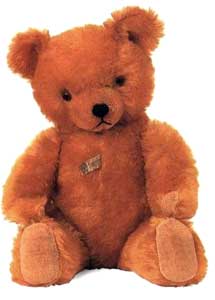 The company devised their name from the baggy trousers worn by the Dutch settlers in America at the time.

The company's labels were originally sewn in to the mid seam on the chest but later they were moved to the forearm.

Toys made by this company during this period were generally considered to  be the best and the company were even proud enough of their bears to call them 'Animals of Distinction'.

During the 1960's the company began producing the 'Smokey Bear' for the American Forest Prevention Campaign. A talking version was also made to inform children about preventing forest fires.

American Teddy Bear's have always had some unique characteristics which are great indicators in helping collectors identify early American bears.

Back to the top of this American Teddy Bear page