Antique Bears made by the Deans Rag Book Company can mainly be dated from the 1920's. Although the company made toy bears before this time they were made from printed cotton and were rather flimsy and very few of these have survived.

The first real plush bears were made from 1915 but it wasn't until the 1920's and 30's that the company really began full production and became well established a quality teddy bear manufacturer.

Here is the current vintage teddies listings For Dean's bears on eBay
Please click on the Images for further details. 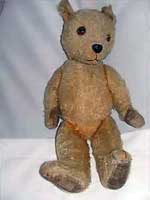 Kuddlemee Range - This was the first range of teddy bears Deans produced after the First World war in 1915. A couple of the first of these bears were known as Master and Miss Bruno which were dressed bears, made in either white or gold plush and which came in three sizes. 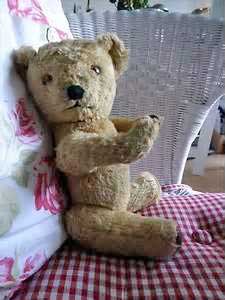 Golden teddies - These were amongst the first teddy bears deans produced again after the second world war. They came in two styles, ashort pile mohair in three colours and a cury mohair.

Ivy and Brumas - Made in 1949 to celebrate the birth of a Polar Bear cub at London Zoo that year. This Deans bear was made in white mohair, with Ivy the mother bear holding her cub Brumas.

Tru-To-Life bear - Made by Sylvia Wilgos in the 1950's, this Deans Bear came in three colours, black, white and honey and had moulded rubber paws and feet.

Between 1920 and 1955 a fabric label was sewn on the right footpad. Deans Bears would also have a paper label hung around their necks which had a picture of two dogs tearing at a rag book.

In 1922 the A1 label first appeared, it consisted of a triangular paper label. There were two grades of A1 bear throughout the 20's with the first grade being made in various colours and filled with the superior kapok filling.

Some bears from the 1930's sported a silver button in the left ear which read "Deans Rag Book Co. Ltd".

From 1956 A subsidiary company was formed with Deans called "Childsplay". From this time bears had a printed label sewn inside their right arm joint which read "Childsplay Toys". This changed again to read "deans Childsplay Toys ltd" in 1965.

Back to the top of this Antique Bears Dean's Page