Toy British bears began their existence like the other leading Teddy bear makers around the world around the early part of the twentieth century. However the craze for teddy bears and making teddies in the UK didn't really take off until the golden era of the teddy bear which was the 1920's and 30's.

Before that time most toy bears were imported from Germany, with only a few British companies making their own Teddies.

The first British bear is believed to be made by a company called J.K Farnell in 1906, with a few other companies following suit. These early teddy bears looked very much like their German cousin's, but because British companies did not label their bears properly during these first years no British bears from this period can be positively identified.

The First World War put pay to German teddy bears being imported; instead the British mills now sold their mohair plush to British companies who began to produce teddies in their thousands.

This company began its life as a publisher of soft cloth books for children and indeed some of their very earliest cloth books included a soft cut out bears.

This is one of the earliest British teddy bear makers and whose biggest claim to fame, other than possibly making the first UK teddy, is that in 1921 one of their bears was given as a present to a boy named Christopher Robin.  And who in turn was the bear that the world famous story book character of Winnie the Pooh was based on. 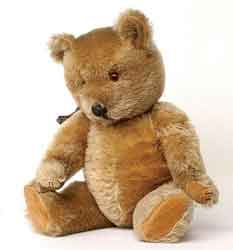 Started by former J.K Farnell employee, Harry Stone and a Leon Rees and which was known as H.G Stone and Company in the 1920's but used the Chiltern trademark.

The companies most popular and famous bear is known as the Hugmee bear which was made for over forty years. The bear had a broad floppy head and short chunky bodies.

Chiltern bears are very collectible; especially their novelty bears with wind up musical boxes inside and the Wagmee bear.

This company started its life as a printing company specialising in children's puzzles and board games. They began making teddy Bears during the First World War and grew from there, eventually winning the coveted Royal Warrant from the Queen in 1938. 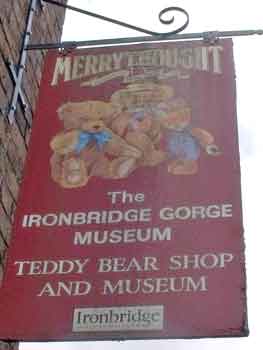 Starting as a fabric mill this company moved into teddy bear making to make use of the Mohair plush they manufactured.

The designer of their bears was a deaf mute woman called Florence Atwood, who was their chief designer until her death in 1949; some of her original designs are still used to day.

Merrythought is an old English word meaning wish bone, which accounts for the wishbone trademark the company uses.

Bingie and the "Magnet bear" are two of the earliest teddy bears attributed to this company.

Two later bears which they are known for are the distinctive "Punkinhead" and "Cheeky bears".

The Second World War shortages and war work meant that many companies had to cease making teddies to use their factories for other work.

Many British bears made at this time and afterwards were made from less quality materials and were in fact often knitted or made from scraps of material.

During the 1950;s hygiene and safety became a big public issue and new materials for making bears were sort to make them easier to wash and less dangerous for children. Plastic eyes replaced glass, kapok was replaced by plastic pellets and nylon fur fabric became the main plush used.

The 1970's saw the beginning of the end for many British bear companies, as thousands of cheaper imported teddies arrived from the Far East. Unable to compete on price many companies closed or merged leaving only Merrythought's and Deans surviving to this day.

Back To the Top of this British Bears Page