Old teddy bears made by the J K Farnell can often be confused with early Steiff bears; however there are a few subtle differences between the two to help you identify your bear.

Best known for their "Alpha Bears" which first appeared in 1908, this bear continued to be made for many years. In the 1920's the design of the bear changed, it now had a shaven muzzle, the distinctive web laws was discontinued, large glass eyes were used and the stitched nose changed shape to a simple square. 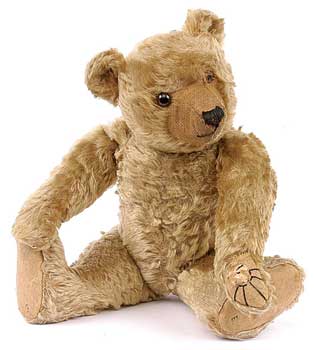 J K Farnell only used very high quality materials to make their bears up to the 1930.s and this made them expensive items to buy when they were new.

A cheaper range called the "Unicorn range " were made after this time to try and help during difficult economic times, these were very successful. However the "Unicorn range" was only made for four years, after which a cheaper Alpha teddy was made.

J K Farnell ceased trading in the 1960's. The Farnell name was bought by the Merrythought company in 1996 who now produce replica quality Farnell bears.

Here are the current Old teddy bears and some replicas listings For J K Farnell bears on eBay:
Please click on the Images for further details. 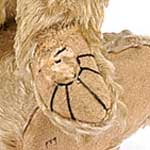 Early Old teddy bears made by J K Farnell were not marked. It wasn't until 1925 when a round card disc with a metal rim marked "Alpha Made" was used for the first time to identify the bears. This Card disc was attached to the chest of the teddy bear.

In 1926 a embroidered label was introduced with the words "Alpha Toy" which was attached to the foot.

After the Second World War times became very hard economically and the company had to eventually downsize and produce cheaper teddy bears for the market. After 1959 a printed red cloth label which read "This is a Farnell Quality Soft Toy" was used on their now much poorly made un-jointed synthetic bears.